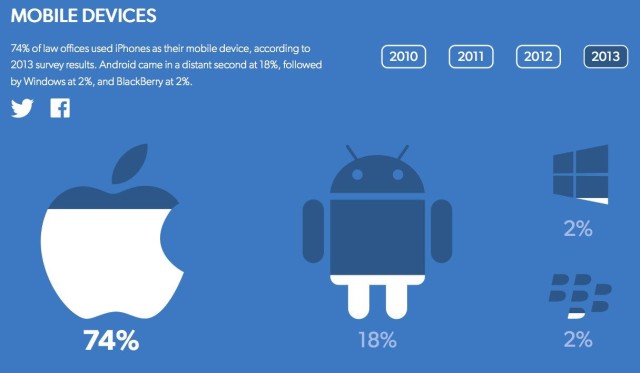 Legal practice management software company Clio has just released the latest results of a survey it calls “Apple In Law Offices,” detailing the use of Apple devices in law firms across North America.
The 2013 survey marked a considerable increase in Apple adoption — with a 10% leap in both office Mac OS usage (from 56% in 2012 to 66% last year), and iPad usage (from 57% to 67%), while iPhone usage spiked 12% to 74% (while Android and Blackberry both saw decreases in law firm usage compared to global adoption rates).

52% of respondents stated that they chose Apple products because the technology was more reliable and secure, while the benefit of usability followed next at 28%. Familiarity with Apple products represented 10% of respondent answers, while design and aesthetic reason accounted for 3%.

The report additionally suggests that since the debut of the iPad, penetration in the legal services profession has risen from an initial 10% to 67%.

“For the fourth year in a row, the 2013 Apple in Law Firm survey results show the iPhone and iPad as two devices that have reshaped the legal technology landscape, with 2 in 3 law offices using either an iPhone or iPad,” said Clio CEO and co-founder Jack Newton. “Few technologies have achieved this level of ubiquity in a law firm.”